rav1e and gains on ARM Devices

rav1e and gains on ARM Devices

It’s been a while I have written a blog about the work I am doing lately. So yeah, I have been working on rav1e, the AV1 Encoder written in rust as part of Project Iris. Currently, if we see, there are other Open-Source Encoders available like libaom from Google, SVT-AV1 from Intel and Netflix. Rav1e’s memory footprint makes it a good starting point for new-cases like Software Encoding in ARM devices, Real-time streaming, while libaom and SVT-AV1 are either too slow or resource-intensive. So it would be much easier to make rav1e fast and power-efficient due to the low-complexity functions.

In the end, we are getting around ~12-20% Improvement in Encoding Time and FPS which is the first step making adoption of AV1 to Mobile devices. It is also very important to note that we’ve been using what SIMD code we have rather than proceeding in the order of lowest-hanging fruit. The relative gains would be more impressive if the outstanding functions were optimized first. Our priority was proving the infrastructure for merging, testing and benching on ARM Devices feasible and now it’s more realistic.

I would like to express my sincere thanks to barrbrain, lu_zero, krish&#95iyer and unlord for their support from the community which made me directly or indirectly motivate to do these.

How did we do it?

So as an initial step, we have to compile assembly functions with rust itself. For having the Assemby in rav1e we did some things like this:

We have elided is_aarch64_feature_detected!() because AArch64 Mandates NEON. We maintain CpuFeatureLevel primarily to focus on native Rust kernels at the runtime, in a way consistent with other architecture.
For AArch64 we have two CPU level, either NATIVE or NEON, if a user wants to change that, then he could use the environment variable RAV1E_CPU_TARGET=NATIVE.

We have made aarch64.rs file where AARch64 CPU Detection happens.

with the objdump we could know the symbols are generated and based upon that, we can write/generate rust specific functions. When we are creating rust specific wrappers for the assembly to work seamlessly, there should be some guidelines to be followed.
So for the rust wrapper, I would take Motion Compensation (mc.S) as example reference.
The rust function is written in src/mc.rs while thee wrapper is written in src/asm folder. We are having AArch64 wrappers in aarch64 folder inside src, so src/asm/aarch64.

In the mod.rs found in asm, we would be having a flag to check if it is having asm_neon flag and if that is present use aarch64 module. we would be doing like this

For the mc.rs, we would be writing accordance to main mc.rs and also for wrapper which we wrote for x86. We would be also writing the tests for the respective files.
If we see in dav1d’s C’s implementation (mc_init_tmpl.c), and assembly implementaiton (mc.s) happens like this, while for us, we have a bit more cleaner way to do it, thanks to rust.

The assembly which we did import from dav1d(src/arm/64) is not modified and untouched. Based on the symbol which we have found from objdump from those, we have made relevant symbols which also matches our native rust implementation.
In the main mc.rs file, we would require one more line to add to make sure that the mc.rs wrapper which we wrote for assembly is taken instead of normal native ones, for that we will further require to add a condition to check

When we are doing this, we should be really careful with the path to the module since if it is wrong, then the whole program would not work. So the easiest way to find the exact way to call the module would be with the help of UNIX command pwd for mc.rs it is /home/vibhoothiiaanand/rav1e/src/asm/aarch64/mc.rs so it would be
asm-> aarch64 -> mc-> all the functions is
asm::aarch64::mc::*;
also, make sure when you do, it should be having :: and not : as it is syntactically wrong.

What are the gains?? Benchmarks !! 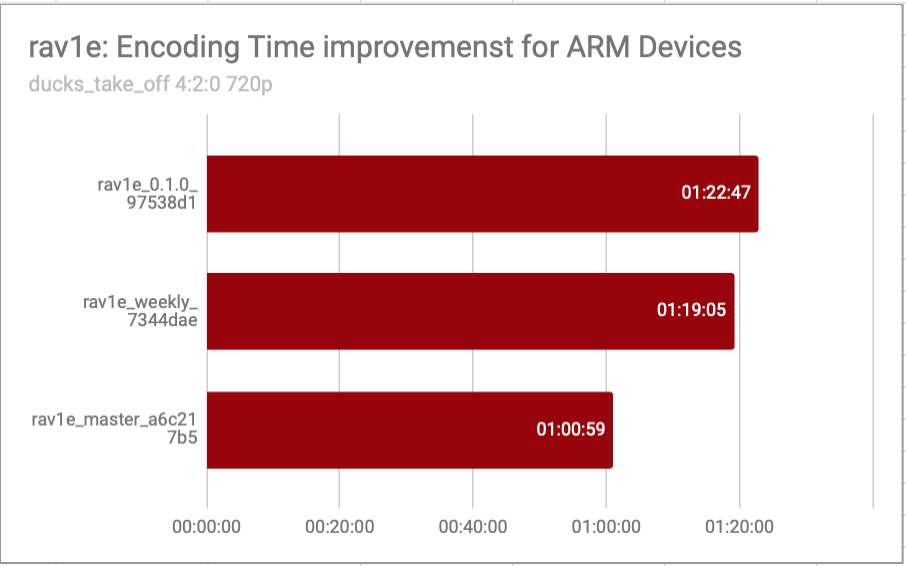 From the encoding, we got around 35% improvement, which is really a great first step towards faster AV1 encoding. 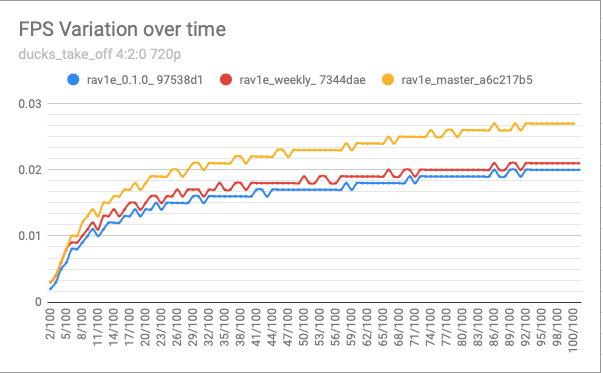 We got 35% improvement for FPS in the ARM devices, which is again good.
Detailed can be found from this Google Sheets.
Pastebin for the this: Logs.
Also, to mention, Thanks to u/Toggleton for his extensive, report. With that, we could get more understanding of how much gain we have achieved.

Also to add upon this gains, this ~35% gain, is not solely due to this, we also had general speedups by refactoring codebase and much more during the Workweek in Tokyo during VideoLAN Developer Days 2019. So we could say, we got at least more than 20% due to the inclusion of Assembly.

Currently, we have only imported all functions and integrated a few of them and we got this much gains. So next plans which we have are also promising like this - Implement SAD and SATD functions, which makes x86 and AArch64 assembly equal. - Fix the CDEF bug which we are facing. The bug which we are facing is, the offset is having a one-bit difference. We have tried to incorporate CDEF changes but it is not so doable easily, we have to rework on memory buffers to incorporate changeable stride for input buffer which would take time and would be a blocker. So what we are going to do now is, have all x86 integrated changes for AArch64 also and have it pass all tests and do a benchmark. - Integrate Looprestoration from dav1d. - Integrate Loopfiltering from dav1d. - Write better tests for transformations - Start writing RDO Assembly functions, RDO is an expensive one in our rav1e. - Have better user-friendly documentation which would help people to understand AV1 better.