Hope all are doing well, in this COVID-19 Outbreak and the lockdown, let us take a minute sometime to pray for the people who did pass away and who are under diagnosis with Corona,

So, this blog post aims to provide some technical overview of how introduction of v-frame, migration to v-frames for av-metrics and also integration of av-metrics into rav1e will help for rapid analysis. Rapid analysis like measurement of encoder’s complexity with metrics like PSNR, SSIM, A-PSNR, PSNR-HVS, MS-SSIM, CIEDE2000 etc. These are based on IETF NETVC testing draft.

So if you are new to AV1 or rav1e or these things, In 2018, the Alliance for Open Media released its next-generation Video Codec AV1. AV1 is so far the most efficient royalty-free Video Codec Standard with respect to VP9, x264. Considering currently available AV1 Open-Source encoders libaom, SVT-AV1 and rav1e.

The Rust AV1 Encoder(rav1e) project by Mozilla, Xiph Organisation is a cleanroom AV1 Implementation having lower memory footprint making it a good starting point while others are either too slow or resource-intensive.

With the help of AreWeCompressedYet runs and analysis on personal high-performance servers and machines, the post also aims to provide some minor analysis and other insights overtime.

Some notable things from the experimentation are as follows:

Into Depths of Analysis and its tools

RTC Video Quality Tool(rtc_tool) is a project started by Google which is used for quick analysis between various encoders by generating graphs based on quality metrics.

The main use-case which the tool is targetting to cover is improved rapid analysis of rav1e with other industrial encoders like VP8, VP9, libaom-av1, OpenH264 which are being used to get the clear trade-offs and hotspots between encoders.

For rapid analysis of any encoder, an equally good or better decoder is required, in AV1 dav1d(Dav1d is a AV1 Decoder) is the best choice.

AreWeCompressedYet is always a better choice, the fundamental issue here is faster and rapid analysis, there would be a trade-off on more accurate results which is done on AWCY but for research and development purpose, this works better. 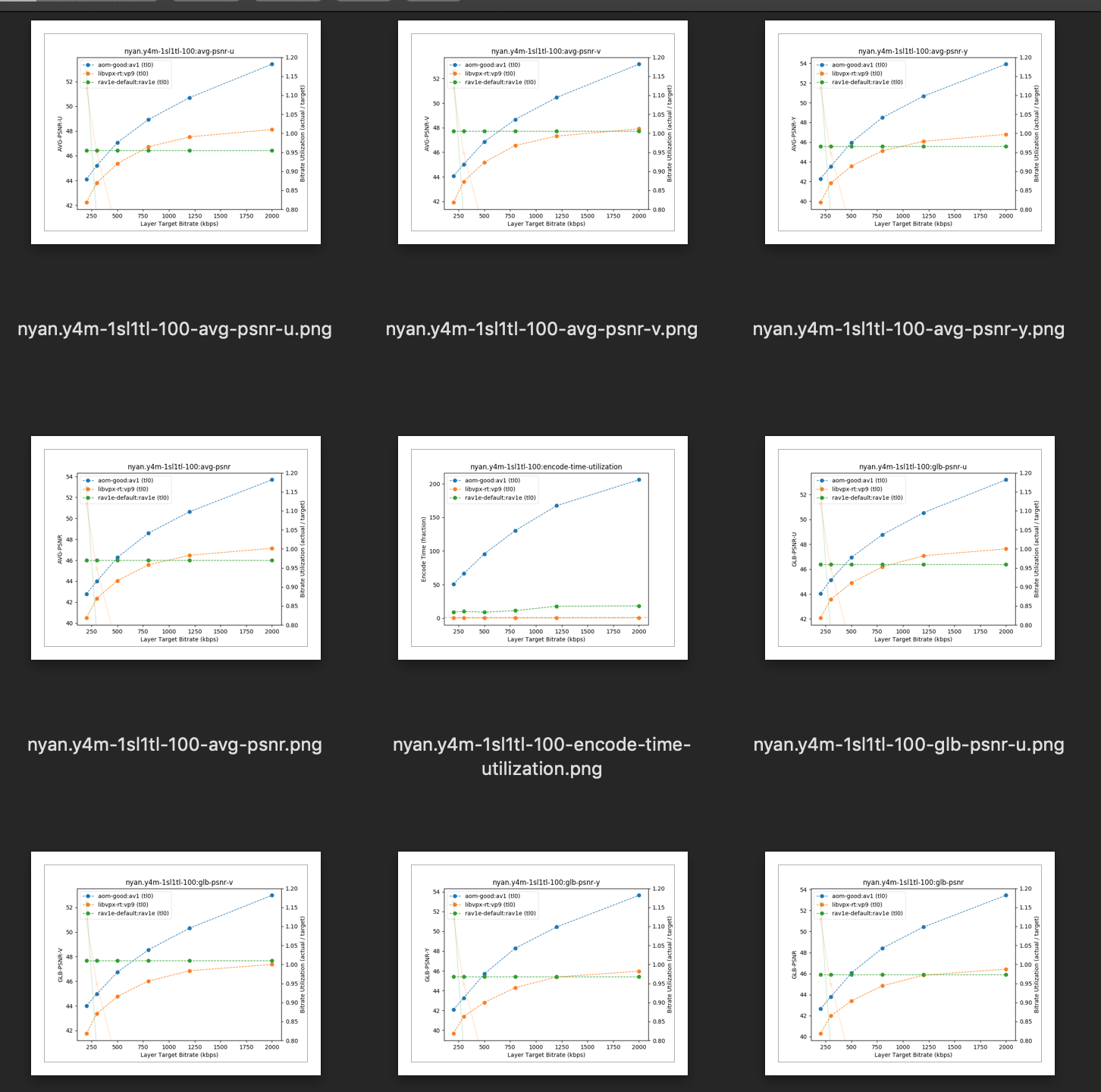 The figures depict the variation of different encoders by producing more than 80 different graphs using this tool which also includes frame data with varying bitrates.

Command which is used to do encoding comparison between multiple encoders including rav1e:

v-frame is a library released by Team rav1e in March 2020, v-frame is library extracted from rav1e to have Video Configurations structures and it’s missionary. v-frame have moved the following to a separate library:

Likewise, there are new simple trait functions for Calculating Padding (FramePad), for the new tile of a frame(AsTile) which has functions for tiles and mutable tiles(as_tile, as_tile_mut) for Frame because these functions are written inside Frame implementation. These are encoder specific ones which can be isolated from the v-frame.

Migrating to v-frame type in AV-Metrics is very much required because common definitions and structures so it can be integrated easily into encoders and will be faster.

Overall with the new y4m decode approach, decoding capability was improved and it is now more efficient.

Once both v-frame and av-metrics are built with the same Frame, Plane, PlaneConfig, Pixel, ChromaSampling, integration of AV-Metrics into rav1e without touching rav1e API Internals will be better. For that the following things are being done:

How it looks now!!

I would like to thank to Luca Barbato(lu_zero), Josh Holmer(soichiro), David Micheal Barr(barrbrain), Nathan Egge(unlord), Christopher Montgomery(xiphmont) and also all others from Team rav1e for the continous help and debugging, reviewing of the whole research work.